As I was mopping my floors for the first time in a long time today, I had a funny thought. What if God had done interviews of my family and friends when I was somewhere around 19 years old. And he said, Hey, I’m looking for someone to have 10 children and run a household and keep everything in order. What do you think about Esther? I’m pretty sure that none of my family members or friends or roommates would have nominated me for the job. Esther? She’s rather messy. Housework and Esther? Nah. She’s kind of absent-minded too, not real detail oriented. Honestly, I don’t think Esther is much of  kid person, I don’t think she’s even babysat much, and she never tries to hold other people’s babies at church or anything like that. She’s not exactly the crafty, fun, play with kids type. She’s rather sarcastic, that surely can’t be good for raising children. All Esther wants to do is play her piano and read books. I can’t see her taking the time away from that to raise a family.

Ok. So probably my friends and family would be too diplomatic to voice their true feelings, but I’m sure they would have thought at least some of that.

I can just see it: A committee meeting. God proposes to a couple angels, I’ve got a position open for Stay at Home Mom of Ten, I’m thinking that I’m going to put Esther in this position. The angels raise their eyebrows (I’m going to presume they have eyebrows) and look cautiously at each other. Umm. God, we know that you know everything, so you must be right, but we really don’t see how this is a good fit. Can you explain?

Then God would say, Look, you see how she has been lazy and selfish about helping her mother out with washing dishes for her entire life? Every time she has to wash dishes she has a temper tantrum. See, I’m going to put her in a position where she has to wash up the dishes after 12 people, 3 times a day. She’s going to learn how to change her attitude, stop treating it like a death sentence, and in fact, one day I will teach how to make that time of serving her family, a time when she can put on worship music and worship me.

The angels nod in amazement. Wow, Esther washing dishes and worshiping? Is that possible?

The angels grin, yes, I’m sure that will be good payback for her poor mother who’s had to deal with her mess for years.

God will smile, and continue. Yes, and you see how absent-minded she is? I’m going to make her have so many details to keep track of that the only way she’ll be able to do it is by clinging to me and my strength and power every day. She’s going to become a lot more reliant on me.

And you see how she doesn’t even notice the existence of children? I’m going to change her heart and make it so child-focused that she won’t be able to enter a public place without seeing all the kids. And she’ll have a heart for them. And she’ll start praying for them and being kind to them. Only I can change a person’s heart like that. And I’m going to use her own children to make this change.

I’m going to take this girl and make her a woman with a heart for me.

The angels get all excited…How long is this going to take God?

God smiles, Her whole life. But what a journey it’s going to be!

I think one of my favorite journeys that I have been on is the journey of learning how to worship God through music. As a child my family sang a lot. My father had in fact been in a musical group all through his growing up years with his siblings, performing on the Christian Radio Station where his parents worked, performing for churches in the states when his family would come back on furlough (usually a year long break from the mission field, a time spent visiting supporters and speaking at many many churches and events). Music runs pretty deep in my family. My father plays the guitar and my mother sings alto and my brother and I quickly learned how to sing the melody while our parents harmonized and then later learned how to harmonize ourselves. I loved to sing for the sheer beauty of it. As a teen my brother and I and our friends formed a tradition, whenever we were driving in a car together, coming back from a trip to the beach or some other type outing, we would sing together. We would sing worship and praise songs and hymns, and usually the songs had parts and we would split into parts and it was the perfect way to end the day, driving home, tired, making beautiful music.

As I got older I slowly started focusing a bit more on the words that I was singing. I think I started doing this at the suggestion of a worship leader or pastor, and it kind of stuck with me. When I went to Biola University I was exposed to a lot more of the modern style of worship: words printed on a screen above the stage, all electric instruments with a good set of drums, easy, repetitive type songs that never quite have a clear melody line. It was the kind of music that you kind of spaced-out a bit when singing. Don’t get me wrong. I enjoyed the music. It was just very different from what I was used to. But I started noticing something when I attended various worship sessions. There seemed to be a different attitude in the people who were singing. Like, it wasn’t so much about whether your voice sounded perfect or you played a really good solo, or sang a song that was technically difficult. It seemed to be more about disappearing into the song. What I mean, is that the song, the words of the song, who they were about was the focus, not the music that was being created. I enjoyed this new way of singing, I enjoyed the feeling of peace that was in the room and I slowly started learning how to turn my focus on God instead of the music.

One of my big moments on my worship journey happened when I was twenty. I attended Biola for two years and then “took a break” (that never ended) and went overseas for a year. I spent my first four months in Haiti. I lived with Laurie and Jules Casseus, my old piano teacher from Haiti. I was kind of crashing emotionally and trying to figure out what I was doing with my life and Aunt Laurie ended up doing a lot of listening as I poured out my troubled thoughts. I was staying with them over Christmas (my first Christmas away from home!) and I was quickly caught up in all the Christmas Music performances. Aunt Laurie has a beautiful voice and she had been asked to sing “Oh Holy Night” at a church function in the nearby city of Cap Haitien. She asked me if I would accompany her on the piano and so I dutifully practiced with her and we quickly got it ready to perform. The night of the performance we drove into Cap Haitien to a large concrete church that I had never been to before. My hazy recollection of the church is that it had a large balcony that went around the entire upstairs with the section in the front of the church becoming part of a large stage-like area where the pastor preached, people sang, and I don’t know what else. My memories for architecture aren’t that great though, so I might be a bit off on that. I do remember that I was shown to a little alcove where there was a small, inexpensive keyboard, jury-rigged to a questionable sound system. There was no sustain pedal for the keyboard and so I quickly looked through my music, figuring out how to accommodate to a much smaller keyboard without a sustain pedal. I’m not a big fan on being the center of attention so this particular set up was a dream come true. I was sitting back, kind of out of the way, there were a lot of different people on the stage, and I was simply accompanying, so the focus was on Aunt Laurie. I had this. Aunt Laurie was singing in French. The words to the French version are actually not translated directly in our English version. We’re actually singing something pretty different when we sing the song in English.

Here is a literal translation of the final verse from French into English which I found handily on Wikipedia:

The Redeemer has broken every bond:

The Earth is free, and Heaven is open.

He sees a brother where there was only a slave,

Love unites those that iron had chained.

Who will tell Him of our gratitude,

For all of us He is born, He suffers and dies.

People, stand up! Sing of your deliverance,

So, here I am accompanying on my little keyboard and Aunt Laurie reaches the final verse. She’s singing and suddenly the whole church rises to their feet and starts singing along, “People, stand up! Sing of your deliverance,” and suddenly I’m not accompanying one person, but instead I’m playing along with hundreds and hundreds of people. But it didn’t matter because I was singing along too and I think I may have been crying a bit because what happened felt like Jesus had suddenly walked onto the stage and everyone saw him and they all stood up and started worshiping him and no one wanted it to stop. I think we ran through the chorus several times, I’m not sure.

After the service we drove home in silence, through the dark, unlit night. We got to the top of the small mountain pass that was close to our home and the driver pulled the car over at Aunt Laurie’s urging. The car stopped and the motor turned off. We climbed out of the car and stared out at the valley below us and then looked up. It was the most clear I have ever seen the Milky Way. It was like we were surrounded by stars and they were dancing in the sky in their own form of worship to their creator and I experienced the meaning of the word “awe”. We just stood there in silence and my heart felt like it was going to explode, it was so full.

The memory of that night has stayed with me, I think because it was a rich experience of worship through music in a way that I had unknowingly always been longing for. Focusing on Jesus, using the music to communicate my love for him, my awe of him, my longing for him. The music was just the conduit. Worship. It’s about focusing everything on him and saying, You Are Worthy. 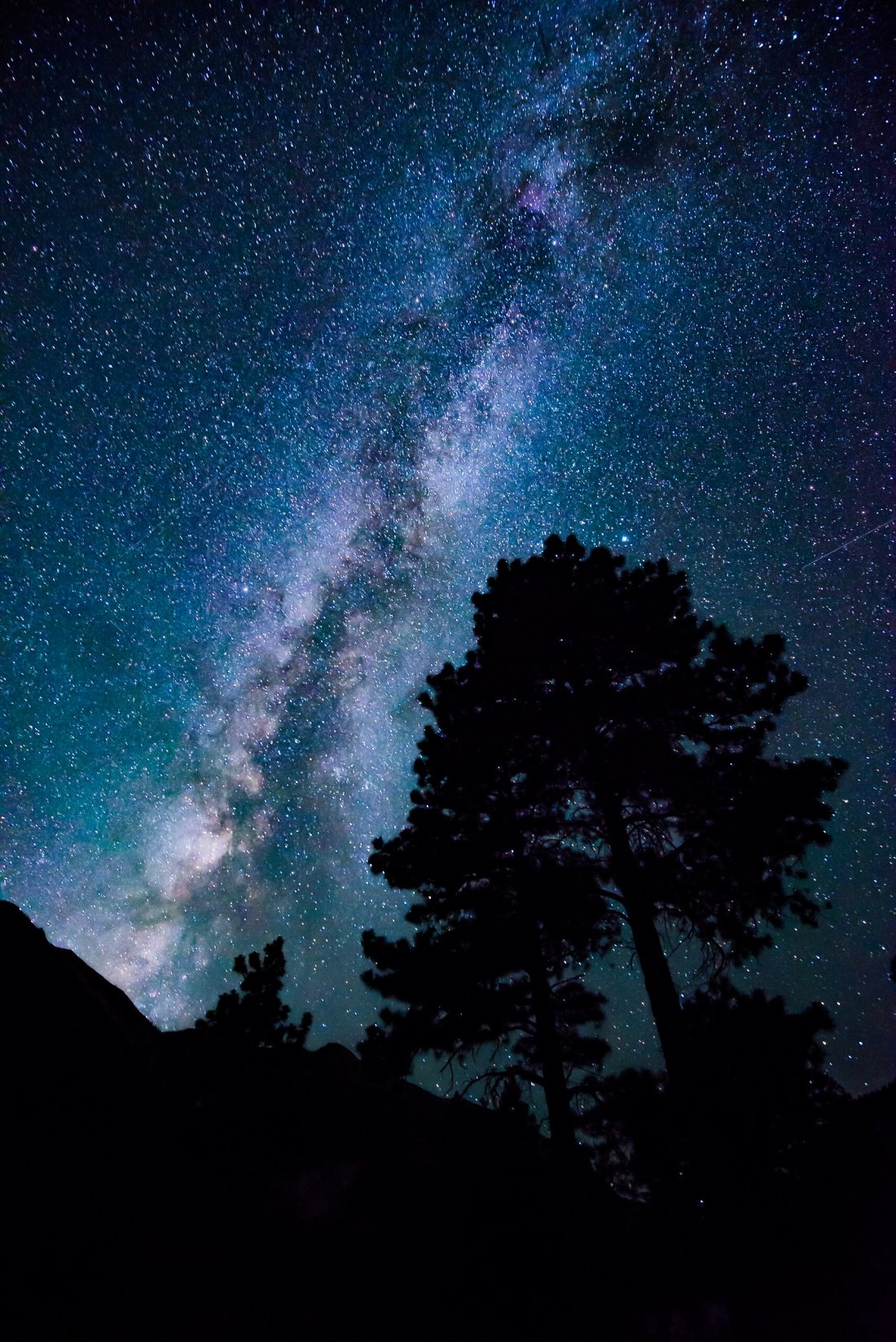