Well, this has been an interesting week. I would say the keyword for this week is STRESS. Since last Thurs night, we have had the following: the car broke down when my husband and I were out on a date; while trying to fix said car, got a phone call from our teens who were babysitting, saying the baby was throwing up; had an incident at one of the kids’ schools that involved a gun and a hard lockdown; was without my van for one day and had to find alternative transportation for my kids to and from school; had one day when four teens had to go four different directions, each needing a car and a chaperone; three family members threw up in the night; had to cancel a gathering in our home at the very last minute because of the previously mentioned throwing-up family members; eight year old swallowed a penny that got stuck which sent us to the ER on a Sunday afternoon, along with several hundred other families who were also there; had to take a daughter to a mandatory meeting concerning her summer camp, got there and realized we were at the wrong location which then meant a race home to review the letter again and get the correct location, more racing around to try and get her there on time; the four year old went off to play and then fell asleep under a blanket, I went to find the four year old and he didn’t answer me when I called which then sent my heart-rate racing while I frantically looked for him, finally found him under the blanket, asleep; my oldest boy had his senior dues stolen; remembered at 7:05 this morning that my ten year old had an appointment at 8am which meant I had 10 minutes to get my two little boys dressed and fed and out the door with all the other kids so I could take everyone to school and then take the previously mentioned child to his appointment with two tired, fussy, little boys tagging along…I think I’m allowed to classify this past week as stressful.

So, what does that have to do with diet and weightloss issues? Well, I can tell you that last night (my weekly night off to go do whatever I want) I was fighting a really big craving to go to Five Guys and get a giant hamburger and large fries and then end the evening with a large ice cream. Instead I decided to be a good girl and go to the library that I remembered stayed open late on Wed nights. Got to the library and found out they had changed their schedules, and were now closed. Long story short, I ended up at a park with some fresh fruit and plantain chips to keep me company, and took a little walk. Then went home and read a book. Major victory. This morning, after getting home from our doctors’ appointment, I was practically pacing. I was so stressed and I didn’t know how to handle it. I just wanted to eat something yummy and not on the diet plan. Instead I went outside and sat in the sunshine and then finally fixed myself a tasty bowl of vegetables and beans. 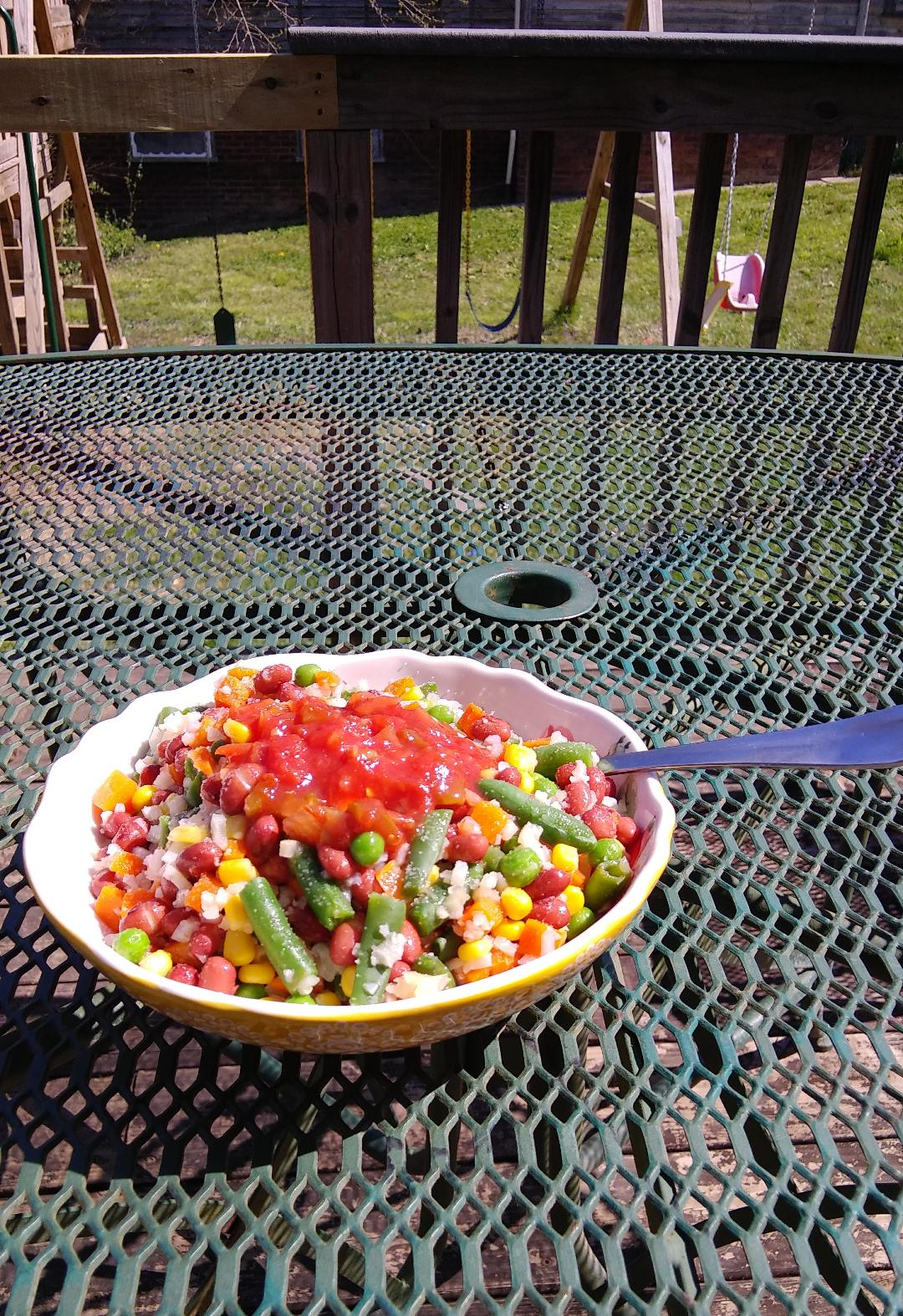 It has been really hard to find new coping mechanisms when the stress builds up, but I’ve been making it, one day at a time. It’s a good reminder that this whole weightloss journey has a lot more to it than just finding the right diet.

Other progress: instead of weighing myself, I have been occasionally trying on a pair of jeans I own in the next size down. Well, ladies and gentleman, I can now button and zip the pants without killing myself. Still have a giant muffin top, but it’s progress!

I have to say, this whole change to a new diet, new coping mechanisms, new thought processes, it hasn’t been easy. It’s actually rather stressful, which has not helped my ability to deal with weeks like I just had. I’m hoping that this will stop feeling “New” soon, and just become a regular way of life.

So, plans for this week: stick to diet, exercise, be outside often, and start incorporating my way of eating into the family’s diet. (I’ve been cooking the regular meat and rice or pasta meals, and it’s getting old to cook food I can’t eat, they’re going to have to start eating more like me!). Here’s praying that my next week is a lot more calm and peaceful. See ya later!

I'm a stay-at-home mom with 10 kids and a wonderful husband. I'm a follower of Jesus and I am also a second generation missionary kid who grew up in Kentucky, Haiti, and Alaska. I have a lot of stories and I enjoy sharing them. View all posts by lifewithesther15